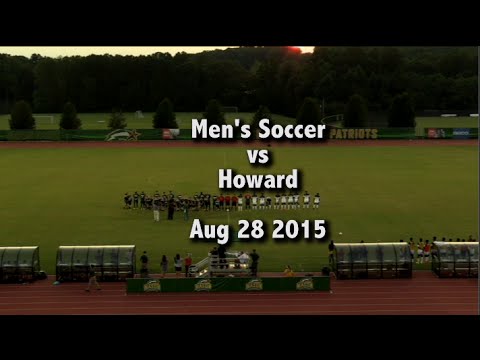 A great start for George Mason Men’s Soccer Team to start their 2015 campaign, leaving their first game at Mason Stadium as 5-1 victors over the Howard Bison. The scoring started off in the first three minutes of play with a ball put in front of the net by Daniel Hoffman. A screen by Jannik Eckenrode distracted the Howard goalkeeper, allowing the ball to find the back of net putting the team up early.  Most of the game however was a bit shaky as far as the Patriots are concerned, a couple missed opportunities and bad placements plagued the team for a majority of the match. This led to the lone goal by Howard off of the foot of Kyle Celestine, scoring off of the deflection by the goalkeeper. The second half got Mason back in control of the game however. Goals by Cullen Hunter, Eckenrode, and two from Edgar Zepada gave the team full control, allowing younger players to see action. In particular was freshman Stephen Durbin who tallied two late assists and played for a majority of the match. This match was part of the Kuyenstrong D.C. College Cup, in which Mason will play the finale on Sunday at 7:30 against American for the championship title.